Stressful trip to Craigavon A and E

"Stressful trip to Craigavon A and E"

I rang the surgery on Monday morning to ask for a home visit following my 93 year old mother falling on Friday night. The paramedic who rang me back referred us to Craigavon saying she needed an x ray and said it would not be appropriate to go to Dungannon Hospital due to her age. He did not feel a visit was needed as she clearly needed an X-ray-despite me asking several times and saying that was my preferred option.

My husband and I accompanied her to Craigavon. As I explained to the paramedic it was extremely difficult to get her into the car and out again at Craigavon. I went to reception and explained she needed a wheelchair while my husband waited with her. We were offered a large wheelchair which was impossible to steer and an ambulance driver had to help. I booked her in at reception and was asked to take a seat. We sat in the nearby waiting area. A little while later we were told this was the Covid area and should move to the bigger waiting area. This made us feel very unsafe as there were several people coughing and wheezing as we sat there and reception had not mentioned the different seating areas. This  should be made clear to anyone entering this area and I feel is putting people at risk. We felt very anxious and concerned already after a difficult journey and this made us felt worse.

We then had to return through the Covid waiting area for my mother to have a covid test and again later to be triaged. This made my mother and I feel very anxious due to the amount of very ill people around and the unnecessary risk this placed us in.

We sat in the waiting area until 11pm  ( we arrived around 2.30 )and still had not seen the doctor or been offered an x ray which was the reason we were referred. We appreciate there were huge numbers waiting but it felt very wrong for a 93 year old to be waiting there all that time. She has a care package and is used to being in bed by 8pm and needed medication.  It was extremely difficult to find anyone to talk to and to do so meant waiting in the reception/Covid waiting area and waiting for someone to open the locked triage area door. The communication to patients and the organisation of systems were so poor I would question ever visiting again-I would rather stay at home feeling very ill than attending again. There were several very ill people and many sitting on the floor-there should be some regular communication about systems/waiting areas/timescales-what we experienced was horrific.

I would especially like to complain about and highlight how awful the disabled toilets were in the waiting area. My mother has very poor mobility at the best of times and this was obviously much worse as she has probably cracked a rib-she normally uses a raised toilet seat with toilet frame.  In the disabled toilets in the waiting area there was a low toilet with no frame or support and no grab rails-rather a shelf like area next to the toilet that offered no support. There were no grab rails that a person could put their hands through to hold onto-I was totally flabbergasted that this was a disabled toilet and felt really angry-it felt unsafe and did not adhere to disability legislation/access. My husband and I both have professional experience in this area and could not understand how my mother was meant to use the facilities.

I had to put the wheelchair next to the toilet and climb under it to lock it so that mother could use it to push herself off the toilet. I had to try to support her putting myself at risk. I ask that this is assessed urgently by a physic/OT as it offers no dignity to patients and puts them at risk-if my mother had been with someone else that she was not comfortable with to accompany her to the toilet she would not have been able to use the toilet. I also worry that there would not have been any staff around to help if she had fallen.

We returned home and I got my mother to bed at 1.20pm-she was wakened again at 7 am by Home care. We called her GP again on Tuesday morning who came out and examined her-saying an X-ray was not needed and could be treated at home. Our trip to Craigavon was unnecessary, inappropriate and a bad decision by the surgery on the Monday. The trip to Craigavon was stressful for my mother and for us and the waiting time for a 93 year old was totally unacceptable. The lack of a clear strategy to keep non covid patients safe and communicate the process is unforgiveable. In addition to disabled toilets do not seem safe or fit for purpose and need immediate action. 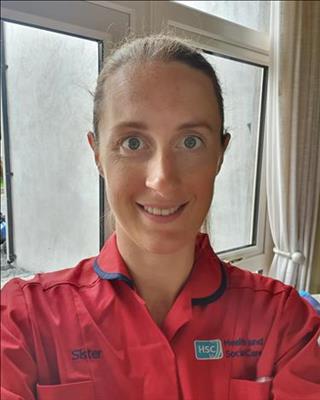 Thank you for taking the time to share you story via care opinion.

I am sorry to see you had a stressful trip to the emergency department. As a department we have been under immense pressure due to the pandemic and this has meant reacting to a lot of necessary changes, some of these necessary changes highlighted by stories like yours.

I am glad to see you were given assistance by a paramedic on arrival, and had access to a wheel chair, be that a large and cumbersome one. They do resemble your worst shopping trolleys at times.

The waiting area is one of those changes that have evolved from the pandemic and it is unfortunately a logistical nightmare due to the layout of the department to get perfect. All patients and relatives (were required) are advised to wear PPE at all times within the department to minimize the risk.

There is a screen in the main waiting area displaying up to date waiting times however this is not visible from the overflow waiting area. I do however apologize that your elderly mother had such a long wait, we try our very best to prioritize very elderly patients but sometimes this is just not possible due to the pressures of the department on that day.

I will be sure to share your story with my OT Colleagues and get the needs of the disabled toilet assessed for change asap so that this does not hinder any further patients. Thank you for highlighting this.

I will be sure to share your story with my colleagues to highlight the impact that poor communication and information has on a patients experience.

I hope your mother continues to improve in the comfort of her own home.

Thank you again for highlighting these issues. Kind regards,